I’m at this retailer to see lēf Farms’ lettuces in-store. The greens are a recent addition to Hanover Coop’s lineup, but Reetz tells me sourcing locally has been a primary driver since the beginning.

“We shall strive to buy as much local from vendors as practical,” is the final sentence of the founders’ minutes from the cooperative’s first meeting, Reetz says, and the cooperative continues to live by this principle. During the local season, which can stretch from May through December, up to 70% of the produce department’s stock is grown in the region.

Hanover Coop buyers meet with local and regional growers in February to plan out the harvest season.

“We meet one on one with them and then also have a larger meeting,” he says. “We emphasize to growers that they set the price that’s fair to you to run your business, and that’s fair to us.”

It’s a nimble system. Many farmers use direct-to-store deliveries. “It’s great for the local economy and great for us. Would it be easier for a tractor trailer to pull up and bring us stuff all in one big load? Sure, but by making that commitment, we’re actually bringing more to us, to the farmer and to our customers.”

Hanover Coop also pays growers within seven days, which Reetz says certainly builds loyalty with vendors. The retailer also subsidized the purchase of reusable plastic containers to get away from using waxed cardboard boxes, and it helped to establish a food gleaning program. Unusable food goes to pig scraps and composting, and an organization collects cosmetically damaged food to repurpose.

Although it started as a small group of families, Hanover Coop runs stores that resemble traditional supermarkets, with some exceptions.

“We appeal to all shoppers,” Reetz says. “You might have some different taste than I have, so I’m not going to judge what you want to buy. We let our members, for the most part, vote with their dollars.”

That means you’ll find national brands of cereals, candy and other items on the shelves.

But in produce, you can see some social values decisions play out. Hanover Coop stocks Equal Exchange bananas when supplies are available, and holds prices to bananas at 99¢ a pound, even when they’re not.

“It’s not easy to find a grocery store that sells bananas for 99¢ a pound,” Reetz says. “We’ve spent time with Equal Exchange, going down to their banana plantations, and we try to educate our customers on the cost, the effort and the reality of growing a banana … picking, packing, shipping and getting it to the grocery store shelf. We’ve decided to commit to a price of 99¢ a pound, and we’re not going to undercut it, even if a major brand gives us a better price.”

Does that mean the produce department is stocked with all organics?

“We’re not striving to drive the consumer or our selection one way or another,” Reetz says. “We’re trying to provide a choice.” Sometimes that means more local products that perhaps aren’t organic, he says.

Overall, organic produce account for about 30% of the produce department’s sales; it’s a number that has gone up sharply during the past couple of years.

On my visit, I saw a dozen varieties of apples I’d never heard of — local heirloom varieties — and Reetz says they carry as many as 55 different varieties of apples during the season. There also was fresh-pressed cider, hard squashes I don’t typically see on display, exotic greens and even purple sweet potatoes. Near the chips was an island display with avocados (two stages of ripeness – not something you’d typically see in a small store in New England), lemons and tomatoes.

The store also had a display of complimentary fruit samples for kids.

As a member of the National Co+op Grocers, which has 148 members representing about 200 stores, Hanover Coop also has signage directing consumers toward value shopping. Red delicious apples, for example, were marked as “co-op basics” for $1.49 a pound. About 100 items in the store are highlighted at any given time, Reetz says.

Value and values, a winning combination for one of the oldest cooperative grocers in the U.S. 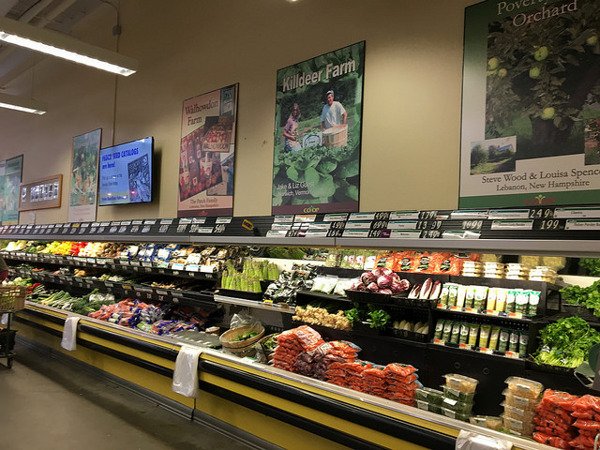